It seems not too long ago that website performance was important but not really required for most web sites. Even during the early days of the Web, it wasn't uncommon to have a really slow website—not because of connection speeds or server locations or which browser was used, no. In many cases, it was because the JavaScript used to render or create functionality for the pages was slow, very slow. Mostly, this was done because of a lack of minification tools and debuggers for JavaScript and a lack of knowledge of common JavaScript practices used today.

It was acceptable to the user that the page content was always slow, mainly because most users used a 56 K modem dialing up to their Internet Service Provider (ISP). The screech of beeps alerted the user to the connection process. Then, suddenly, the user was notified on their desktop that a connection had been made and then promptly opened the default web browser, depending on whether it was Internet Explorer 4 on Windows 95 or Netscape Navigator on a NeXTStep machine. The process was the same, as was the 2 minutes and 42 seconds it took to make a sandwich, waiting for HotBot to load.

As time moved on, users experienced Google, and then suddenly, page speed and load times seemed to grab more users' attention, though, even today, the plain Google theme on the main Google search site allows for speedy download of the full site's code. This was regardless of the Internet connection, a whole 1.36 seconds, as indicated by Safari's Timeline tool, shown in the following screenshot, giving us a clear indication of which resources were downloaded the fastest and which ones were the slowest.

Part of the reason for this was that the tools used in modern browsers today didn't exist for Internet Explorer or Netscape Navigator. In the early days of debugging, JavaScript results were debugged using JavaScript alerts, giving feedback to developers since the modern tools weren't around then. Also, developer tool sets today are much more advanced than just simple text editors.

In the following screenshot, we show you a website's download speed using Safari's Web Inspector: 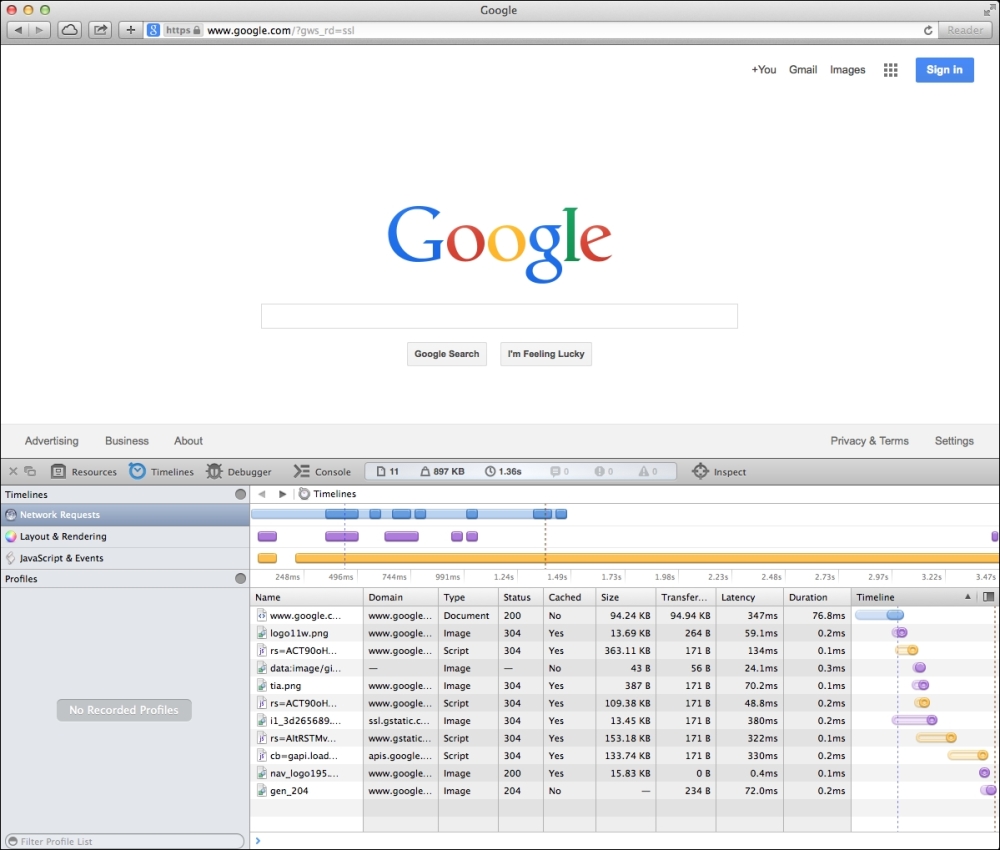