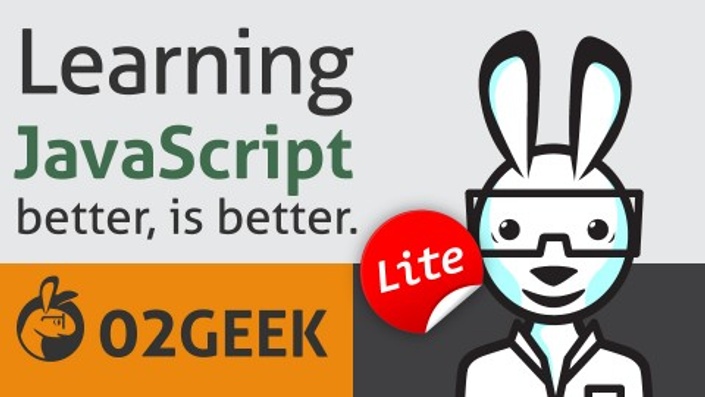 JavaScript doesn't need to be hard! Until now you scanned the web to find tutorials or a fast script that did something close to what you wanted. Being a task-oriented soul, you started to develop a hatred for the language mainly because you just didn't get it. It seemed hard as you just took a deep dive into it and hoped for the best. You're creative, right? You probably think you'll never be a great developer as you don't use that particular space in your head: you think visually. Stop that negative thinking! Most of the web resources have one goal: to sell you something or to show off. It's really hard to find a fully detailed and planned explanation of the things you really need to know (mainly because it's not profitable and it's easy to jump around when there are hot trends.) That just isn't us because we have a sharp focus on education: that's how we make our income and we do it out of love to make technical things easier for everyone. This title goes a bit faster then some of our others, so if you're really new to programming, don't forget to check out developer basics titles in our catalog.

Our Students Love Us.

Don't take our word for it. take over 1,000 students o that gave us 5 Stars (CLICK STUDENT NAME FOR VIDEO REVIEW):

About your Teacher Ben:

He is the owner of the online video training school 02GEEK, and an Adobe ACP. He enjoys spending most of his time learning and teaching. Ben has had the honor of developing applications for US Congress members, Prime Ministers, and Presidents around the world. He has built many interactive experiences for companies such as Target, AT&T, Crayola, Marriott, Neutrogena, and Nokia. He has technically directed many award-winning projects and has been a part of teams that have won three Agency of the Year awards.

As the CEO of Everything Nice he runs and maintains all Google AdWords Campaigns for 02GEEK .